Delhi or should I say Dilli comes under one of the Union territories of India. Some used to say that this is the world's oldest city existing. But when you are going to plan a trip that too, alone it can lead out to be fun. Finding the right place to visit is something that you find it difficult because when you are going on a trip, you are expecting something out of it.

When you are done with deciding the right place for your trip, you should take a key destination of the place to visit. At times when you are confused as to where to visit for the trip, we are here to help you we are going to give you a list of 12 best places to visit in Delhi. Let's get started with the fun. 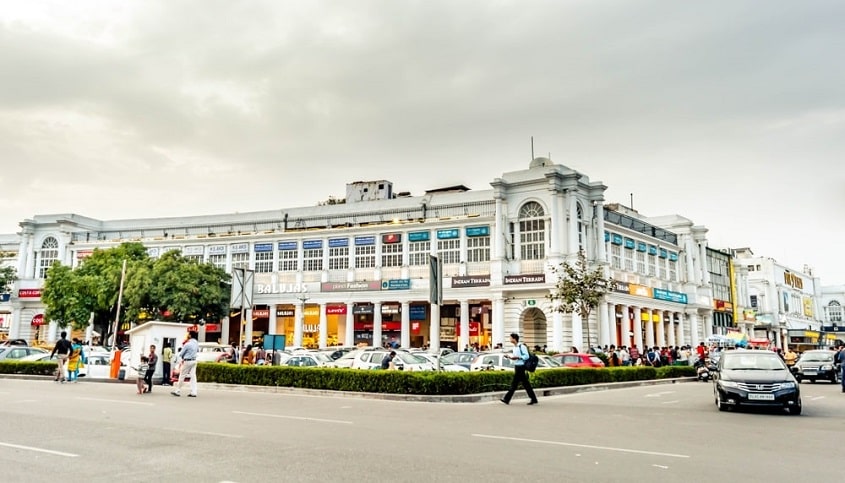 One of the famous places to visit in Delhi is Connaught place now turned to (CP), which is also known to be Rajiv Chowk. This place serves as the hot spot of the shopping center of Delhi. It became a major hot spot of shopping, after the opening of metro services under it. The next time, you come to this place don't forget to take a peep into Palika bazaar which is the most loved place of shopping lovers. You can get traditional to modern kinds of stuff from this place. The next place in the list of tourist areas to visit in Delhi is Jama Masjid. It is known to be the largest mosque in India. The interesting thing is that this mosque is situated opposite Red Fort (which you will find in the next point). When you are roaming around the streets of amazing Delhi city then you should pay a visit to this mosque also. However, the visiting costs no charge but when you want to get the full Delhi in your view and climb the Minar of the mosque then you will be charged accordingly. You are not allowed to take pictures while the prayer going on. 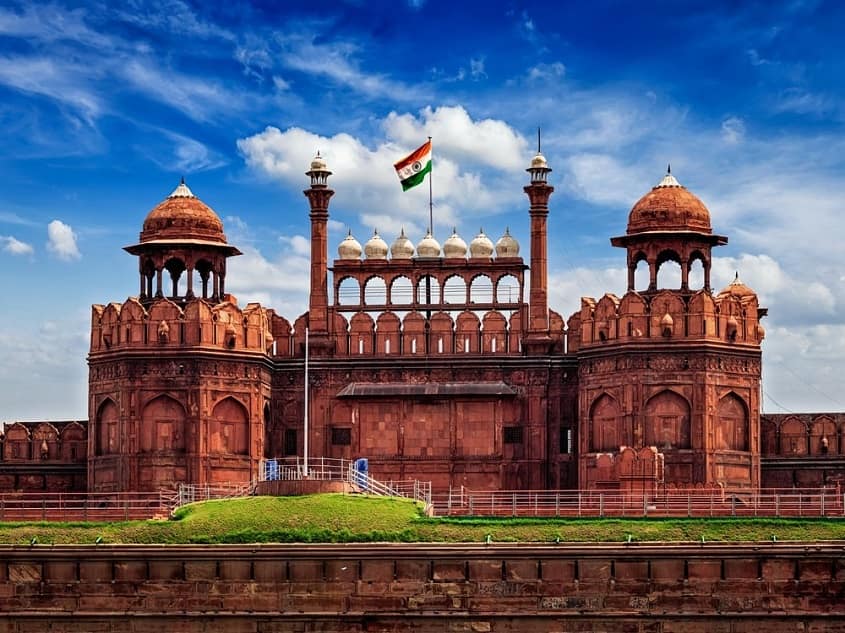 Red Fort also is known as Lal Qila and it is one of the historic monument of Delhi. So this place stands on the place of the third position in our list of best places to see in Delhi. It is the center of attraction among the city's monuments and visitor's most loving place as well. It spread out its majestic aura which is encrypted in its red sandstone walls and create an awful scenery. It is built by the Mughal emperor in the memory of Shahjahan. You can get to see many of the monuments inside its wall and can be entered through a huge gate called Lahore Gate. 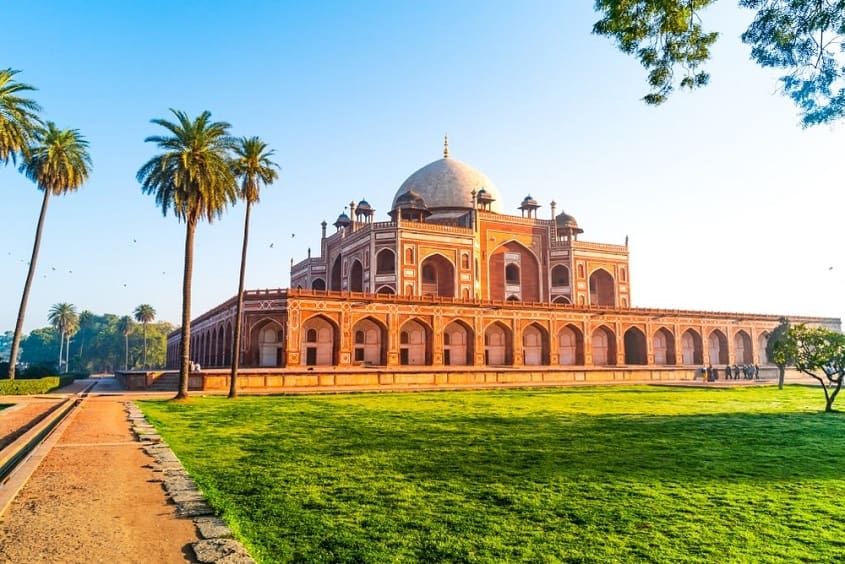 This beautiful monument was built in the year 1570, this tomb made by Queen Haji Begum. Queen Haji Begum is said to be the widowed of Humayun. This monument has the Persian artistry on its wall which made it stand in the list of tourist places to visit in Delhi with family. One interesting fact is that very few people come to notice that this monument resembles the world's most famous monument which is the Taj Mahal. This monument is open for everyone and each day of the week. One tip you need to take is that these monuments seem to beautify itself in the late evening time. 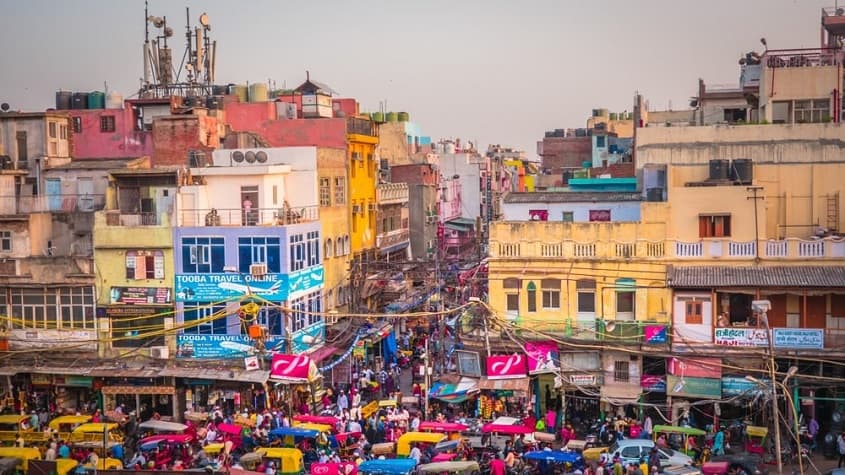 The other place manages to be among the famous areas to see in Delhi is Chandni Chowk. It comes in the small section of old Delhi which is still said to be "heart of the city". You can explore this place if you are in a mood to experience any natural and authentic Indian bazaar. You are also going to give an experience about the life of Delhi people. 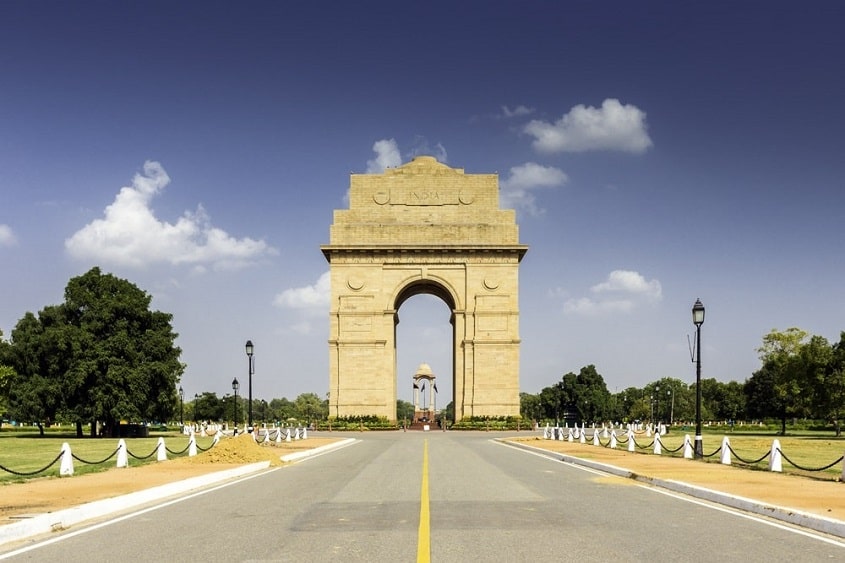 This mesmerizing place situated at the end of Rajpath and it comes among the best tourist spot to visit in Delhi. This is the route from where the main parade leads to Rashtrapati Bhavan. The way to Rajpath across India Gate is covered with grassy lawns which turns out to be a center of tourists visiting the area in the evening time.

By the time of the evening, when the structure lits up you can adore the beauty of the grassy lawn. The India Gate was built in the memory of soldiers who sacrificed their precious lives during the First World War. 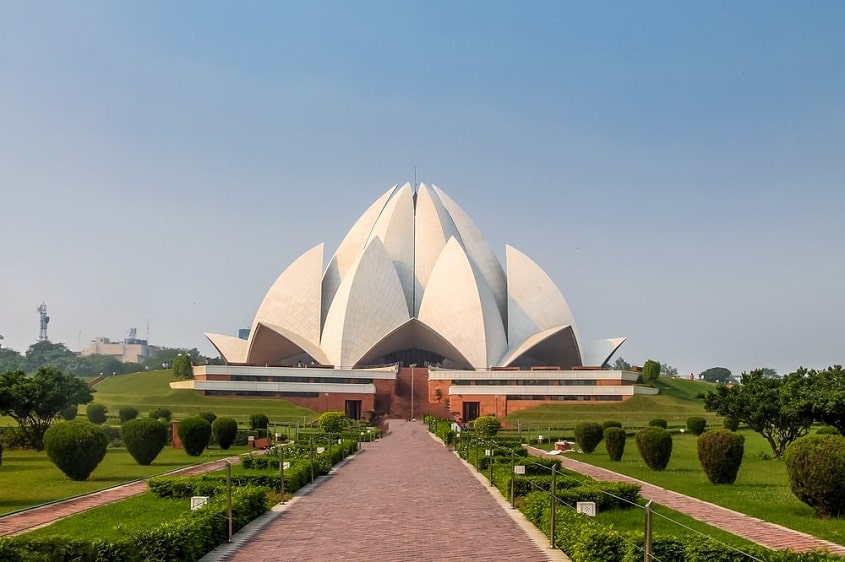 Lotus temple also is known to be Bahai Temple which gives a big owing to the lotus flower. Lotus is known to symbolize four main religions which are namely Hinduism, Islam, Buddhism, and Jainism. There are a series of seven major Bahai temples across the world and among which this temple was constructed last so this became one of the famous places to visit in Delhi. This beautiful place is open for all those people who believe in any religion and wants to pray and meditate in peace. The nine pools around each of the petals are such a thing to must-see. 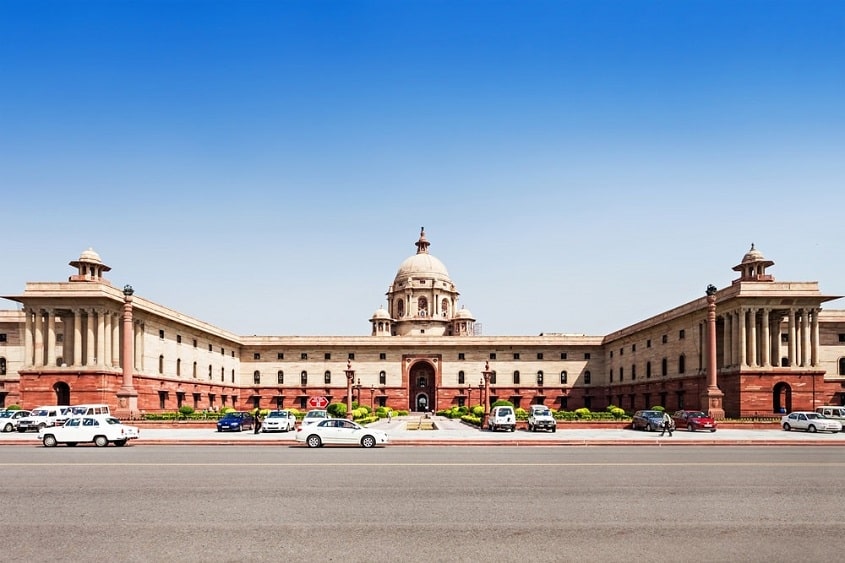 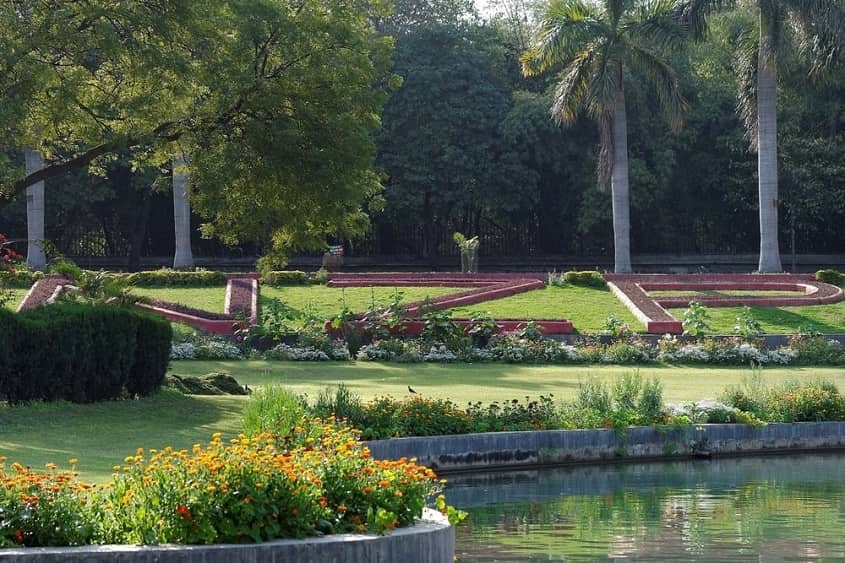 This park full of treasure is situated at Mathura Road and came out to be famous places to visit in Delhi with family. It is a huge green park that is focused to save the biodiversity of the country. This wide green park serves out to be home for many of the rare wild animals all over India. You can walk across all over the park by foot if you want seamless white tigers and elephants in front of your eyes. 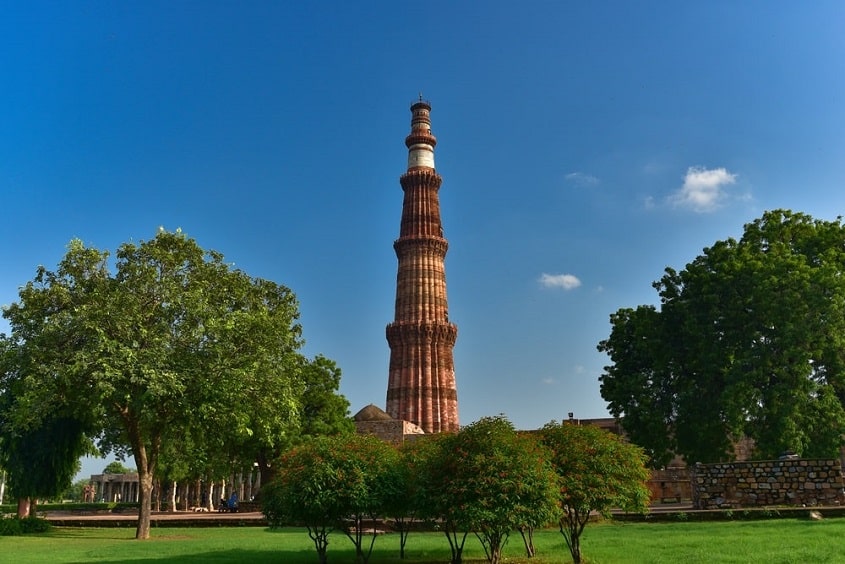 It is known as the tallest tower in India. Yes, the next place in the list of tourist spots to travel in Delhi with friends is Qutab Minar. This monument has witnessed victory and the beginning of the Mughal era across India. One of the interesting facts is that it is 73 meters tall and was built by Qutab-Ud-Din Aibak. Qutab Minar was built after the defeat of the Hindu Kingdom. While some people say that it was built to serve the people coming to pray to this place. The very first mosque built in India WIS Quwwat-ul-Islam situated at the base of Qutab Minar. 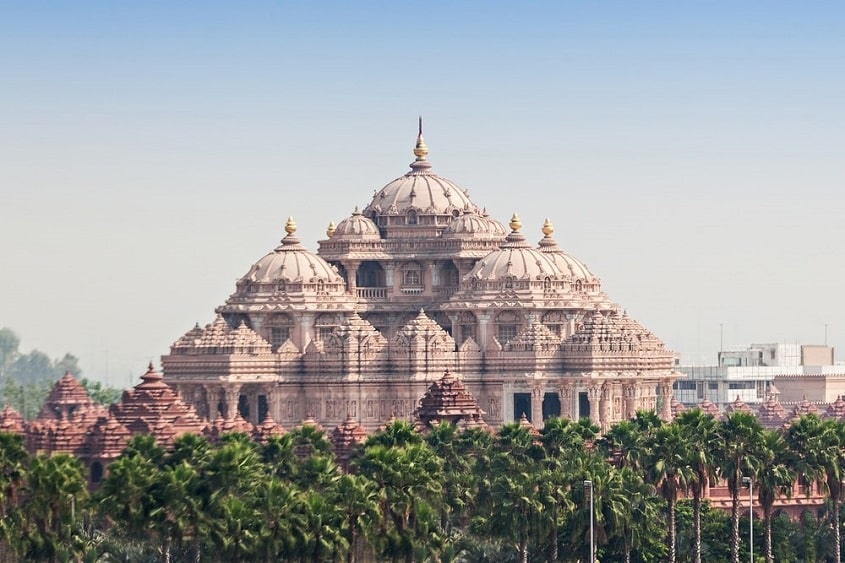 No matter what religion you follow, but if you want to see a mesmerizing view then visit here in the morning or evening time. This is one of the beautiful places and known as the largest Hindu temple, holds the 11th position in the list of top areas to visit in Delhi. You will be amazed to know that the construction for the fountain was made to be with concrete and for the entire temple granite sand marbles across the globe came to be used. 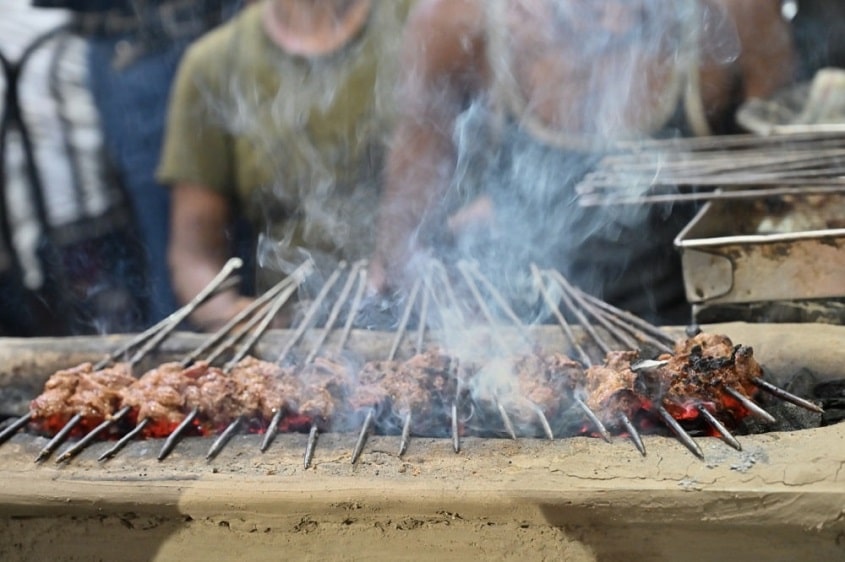 You can't imagine about delicious street food you are going to miss if you don't visit this place which is called Kabab Lane. The recipes and flavors used in their foods have gained such popularity to the end of the country. If you have found yourself standing in the mid of a street that is full of food then it is likely that you are in Kabab Lane. Kababs, Biryani, and royal tandooris attract every visitor to come to adore Jama Masjid, as it stands adjacent to it.

So with this, it's a wrap and these were the most exciting list of best places to visit in Delhi. I hope you visit them at least once in your round of the trip.

Famous places to live in Delhi

Advantages you get by Hiring Moving Services

Try Solo Travel at Least Once in Your Life

Get a Quick Quote

Get a free quote now to set your budget for packing and moving needs.